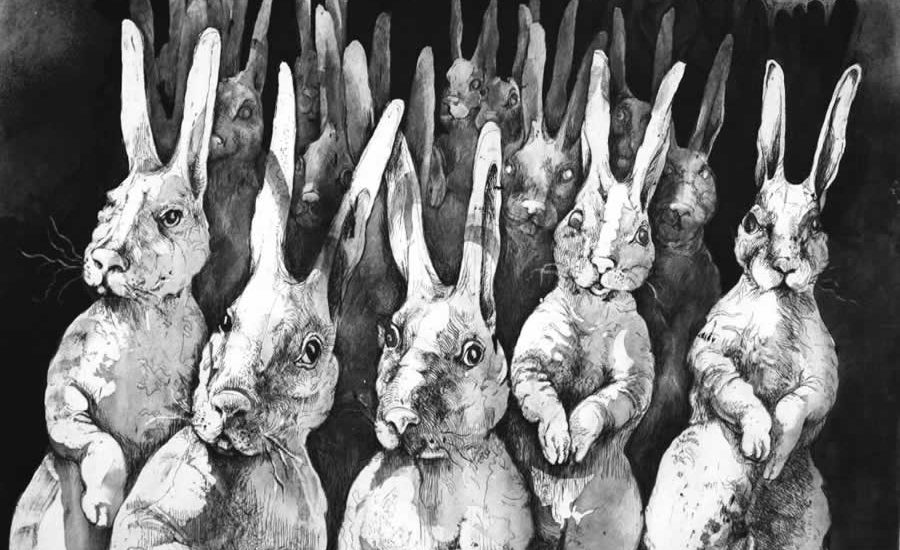 Standing rabbits grace the wraparound cover of The Tusculum Review volume 6, their recent poetry prize issue. Ralph Slatton’s pen-and-ink drawing on the front and back of the issue is complimented by a five print set inside the magazine, enigmatic representations of creatures encapsulated by thick branches and ropes. Slatton’s work is a preface for the issue’s contents: eclectic, dark, with sufficient breadth to make the magazine more like a book than a collection of individual pieces. Few magazines—with the notable exceptions of the Indiana Review, New England Review, The Kenyon Review—consistently produce single volumes that exist as collaborative wholes. The Tusculum Review manages a mix of autonomy and unity, a strong example of the text-based approach to literary magazine editing, producing issues that exist as works of a unified vision, not merely anthologies of submissions.

Allison Joseph, editor of Crab Orchard Review, served as the final judge for the poetry prize, and two of her poems appear in the issue. “Newbie Runner” grasps the religious cadences of running through the perspective of an athlete returning to the sport—“muscles that haven’t spoken in years learning / this new language”—and avoids the even-muted sentimentality so often present in sport literature. The poem concludes with the observation that the “miles I tally / in my sweet red book” become an obsession: “How close this comes / to addition, junkie behavior or worship.” Joseph’s choice for the prize, Nancy K. Pearson, is represented by six poems, most of which are marked by association of image and theme. The choice to include multiple pieces by a prizewinner is smart. Often winners of poetry contests appear arbitrary and one-note, while Pearson’s mini-collection portrays a stronger ability.

Other notable poems in the edition include John M. Chávez’s “Dust of Industry, Spring” (“Evening interred again / a stand of pine shadows / is a cemetery”), Darin Ciccotelli’s long poem “Cyclops” (“Boys race. Boys uncrinkle their kneeskin. / Feel on their necks the sun’s brawn”), and Doug Ramspeck’s “Medicine” (“This is the garland they must wear: / the swamp smell clinging to the skin / as fetid dream.”). The best poem of the issue, Christopher Salerno’s “Protest Songs,” begins “Every kiss has an army” and continues, focused and terse, bound by an implicit and explicit “us.”

The prolific and always-engaging Stephanie Dickinson has three prose poems/flash fictions in the issue, each with a pinch of the macabre. “(43)” has a father saying “You’ll always be my little girl. My love for you won’t suffer”—followed by narrative, “I licked the cheesecake from his spoon. A trapdoor has been kicked into my guts.” “(41)” continues the mood, where physical and emotional pain coalesce, the literal existence of either irrelevant: “Bitter dandelion and shad grass. He unfleshes my bones and says he is dressing me.”

Jan LaPerle’s “Purple Heart” is an excellent compliment, another compressed piece with a lyric, dark quality. In it, Lonnie Lee Oliver discovers his wife “hanging from a rope in the barn.” LePerle steps back in the succeeding sentences, noting “a spring calf frolic in a far field” and how sunlight “split his wife into two pieces.” Lonnie “worked less and less in the fields” after the death of his wife, instead writing “sad postcards.” The second-half of the piece becomes nearly fantastical in order to replicate Lonnie’s pain, and the final paragraph is a beautiful representation of pain: “He screamed and the snows around his house melted.”

It was refreshing to see eight non-fiction pieces appear in this issue, though not surprising, as two of the advisory board members—Patrick Madden and Michael Martone—are accomplished practitioners of the genre. Several are worth specific mention: Susan Bryant’s “Madame X’s Soup Pot” is a tale of that stained cast-iron pot’s travel from “a family of ‘pieds noirs’”—French Algerians—to Bryant’s own kitchen. Cassie Keller Cole’s “Full Stop” is a wonderful meditation on the punctuations of prose and life: “The purpose of original notation was musical: when to give emphasis, speed, emotion, volume. Spaces gradually invaded, came between words and created new boundaries.” Considerations of prose become considerations of body: “Menarche and menstruation allow a slight pause in time for me to reflect on a consistent, unadvertised, basis. My period is mine: so private yet linking me to other women.” Catherine Curtis’s hilarious “Smells” begins with an appropriate jewel from Montaigne (“To smell good is to stink”) followed by “I can’t remember if I put on deodorant this morning.” Curtis’s prose is beautiful in representing the rank: “Odor seemed to rise from the white floor tiles like steam, to sigh out of the small red lockers.” Like the non-fiction of William Gass, Curtis curls all possible meanings from the concept of smell, a convention also adopted by Jennifer Nicole Sullivan in a later essay in the issue, “Mustachio.”

Michael Danko’s “Red” is the most dynamic work of the issue; again, like Gass, Danko unpacks a color—red—through all of its existences. The discovery of such a piece in a literary magazine is met with thanks (and further thanks that Danko’s piece is merely the best of many good works in the issue). Danko’s essay is encyclopedic without being overwhelming, full of litanies and observations, though grounded in common sense and humor: “When you roll out the red carpet for someone, that someone is a very important person, like Red Auerbach. And my favorite excerpt:

The flame of shame seems to be an involuntary physiological revelation of some plan (or just stray plain hope) you want to hide.  Blushing reveals desire, libidinous infatuation, fantasy, or perhaps some other hidden agenda (or unrequited emotion) that some of us work like devils to keep concealed.  Sometimes, as Adam Phillips writes, the unexamined life is worth living.  Other times, perhaps, public confession is good.  Determining the correct place and time for each is the trick.

Danko’s prose is always self-aware and avoids the appropriation of infallibility that dogs so much of today’s intellectually-minded creative non-fiction. The same is true for this entire issue: palpable prose—sometimes dark, always honest—with a healthy sense of humor and self.